The answer is simple: certainly Germany. But above all Russia, cooperating with Berlin. The arrangement in the sphere of military and energy security is thus also simple. The greater the American presence in Central and Eastern Europe, the lower the chance of a return to the times of the Russian-German condominium. An invitation of President Andrzej Duda to the White House and talks with President Donald Trump are another step towards strengthening Polish security. 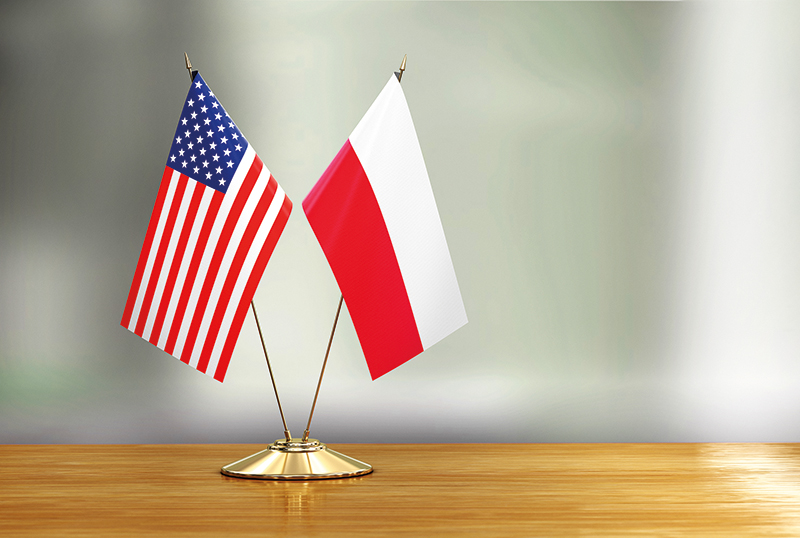 One and a half billion dollars. That much money, with its teeth clenched, Gazprom had to transfer to the accounts of the Polish state-owned energy company PGNiG. This is the result of an international arbitration decision that has been implemented by the Russian company, which is a body de facto implementing Kremlin policy. The arbitration concerned the inflated gas price that Poland had to pay to the Russians, the price that was accepted by Donald Tusk’s cabinet in 2010 in an annex to the so-called Yamal contract. In fact, the battle for compensation started only after the Law and Justice (PiS) party came to power while the consistency and professionalism of the team of lawyers I brought to PGNiG as the vice-president of the company, played a huge role in this process. We showed that in the clash with Russia we do not fight a losing battle. Not only have we recovered a large sum of money for Poland and its citizens, thanks to which since July 1 the price of gas for individual consumers in Poland has dropped by 10 percent, but also our policy of energy diversification allows to completely give up Russian gas. At the end of 2022, when the Yamal contract expires, Poland will become independent from Russia in terms of energy. It will strengthen our independence and security even more. This is possible thanks to the alliance with the United States – although much is said about Fort Trump and increasing the American contingent in Poland, after all not less important is the development of energy cooperation between our countries.

The cooperation in the domain of gas is one of the pillars of the Polish-American alliance. Under the rule of the Law and Justice party, Poland started to import liquefied gas from the USA, thus reducing its dependence on Russia. The first transport of American LNG was delivered to the President Lech Kaczyński LNG Terminal in Świnoujście in June 2017. In the fall of 2018, PGNiG signed long-term agreements with three American companies. This is intended to be one of the pillars of Poland’s energy independence. Thanks to LNG, but also to the Baltic Pipe (the construction of the gas pipeline connecting Poland with deposits in Norway has just started) as well as own extraction, Poland will become fully independent from Russian gas, even being able to support its neighbors’ diversification efforts. The gas pipeline connection with Lithuania is already under construction, there is also an agreement among Poland, Ukraine and the USA, thanks to which the American gas imported to Świnoujście, would be send to the Ukrainian market. Besides, a possible nuclear power plant in Poland – discussions with the Americans on this matter are already being held – could also support Lithuania in terms of energy. President Andrzej Duda’s visit to the USA and the arrangements made there confirm that American companies and capital will be the strategic partners in the Polish nuclear project. The value of the Polish-American contract for the construction of a nuclear power plant in Poland is worth about 30 billion dollars. Furthermore, Poland and the USA are united by their objection to the Nord Stream 2 – a Russian-German project that strikes at the safety of our entire region. It was the Americans who imposed sanctions which halted the construction of the gas pipeline, whilst at the beginning of June a bill, which significantly extended the scope of the sanctions, was presented to the US Senate. Its adoption would de facto make it impossible to complete Nord Stream 2 for good.

In the sphere of energy security, we have long had Poland and the USA on the one hand, as well as Russia and Germany on the other. But recently this contention has also moved into the area of military security. And so Germany, which skimps on military spending (consequently the Bundeswehr is in a deplorable condition), thus could hardly be regarded as a strong NATO ally, is protesting against the withdrawal of some US forces from their territory. As Trump has rightly pointed out on more than one occasion, Berlin receives free military protection without strengthening its defense itself and is even financing (through gas cooperation) an enemy of the West – Russia. Now the dissatisfaction of the Germans is probably due to the fact that a part of these withdrawn American soldiers will be relocated to Poland. Although during the meeting between Trump and Duda no specific declarations were made regarding this matter, it is known that the US military presence in Poland will be strengthened through the transfer of soldiers from across the Oder River. This means that more Americans will arrive to Poland’s territory than the 1,000 soldiers initially determined back in June 2019. As a reminder, today there are about 4,500 of them, including around 900 in the international NATO forces. On June 24, 2020, President Donald Trump received the President of Poland Andrzej Duda at the White House. It was the first official meeting of the US leader after the coronavirus pandemic which caused a freeze in direct contacts with foreign leaders. It confirmed Poland’s status as the key ally of the USA in Central and Eastern Europe and one of the most important partners in NATO. Under Trump, Poland is also gaining importance in US policy towards Russia. We remember how Barack Obama’s policy turned out. The Russian reset emboldened Putin to attack Ukraine and annex Crimea. That is why the Polish-American alliance is the worst-case scenario for Russia. It stands for a strong US presence in our part of Europe and, simultaneously, strengthening Poland. Moscow will do everything to undermine Poland’s strategic partnership with the USA.

Author: Janusz Kowalski – Secretary of State at the Ministry of State Assets and the Government Representative for the reform of ownership supervision over state-owned companies. Local Councillor in the city of Opole (2002-2006) and the Deputy-Mayor of Opole (2014-2015). Member of the Energy Security Bureau at the office of the President Lech Kaczynski. He has worked in the Bureau of National Security as well as in the Ministry of Economy (Bureau for the diversification of energy sources lead by Piotr Naimski). Former Vice-President of the Board at PGNiG S.A. From 2018 to 2019 Member of the Board at PWPW.

« Online Debate: A Balkan future of the Eastern Partnership
Hong Kong, Tibet and the WHO – Chinese-American zones of conflict »