New Road to the Baltic Sea

Contrary to the provisions of the Polish-Soviet border agreement of 1945, the Pilava Strait linking the Vistula Lagoon to the Baltic Sea was not opened to Polish merchant vessels while Poland’s port of Elbląg had no longer access to the Baltic Sea. In June 1990, the yacht “Misia II” under the skipper Edmund Krasowski, a Member of Polish Parliament at the time, as the first sailed from Elbląg to Gdynia across the Pilava Strait. Once fully implemented, digging a canal on the Vistula Spit will put such gestures to a halt. 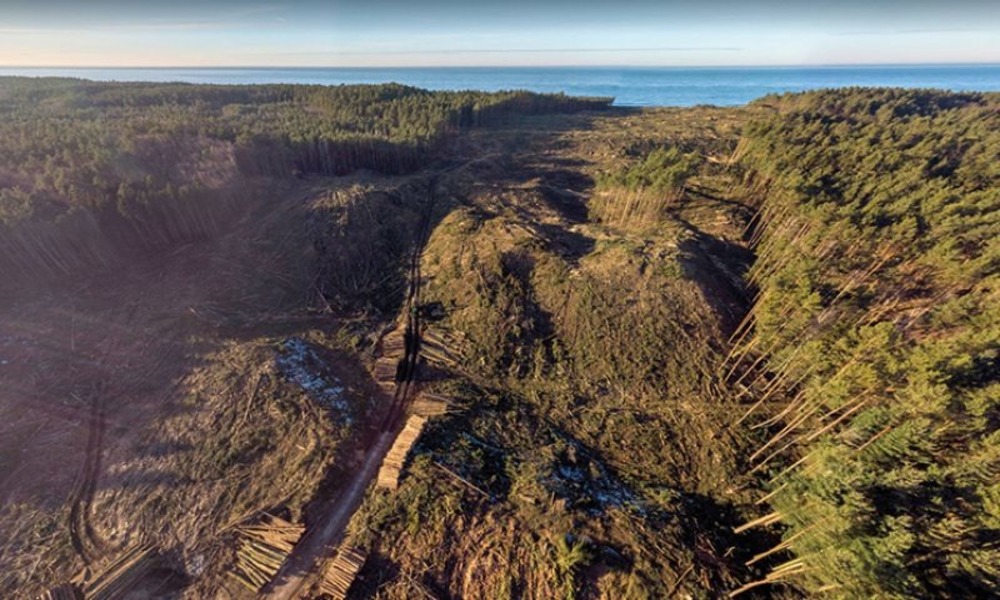 The development of Elbląg, which was in past one of Poland’s biggest harbors, was inherently associated with maritime trade. The Vistula Lagoon is enclosed by the Vistula Spit, or a sandbank less than 2 kilometers wide that separates Poland from Russia. The only sea connection to Elbląg leads through the Pilava Strait that belongs to the Russian exclave with the capital in Königsberg, or Kaliningrad, named by the Soviets after Mikhail Kalinin, an official who signed an order to execute Polish officers in Katyn. It is noteworthy that this territory has been granted a special status, making it strategically important from the military point of view. Located on the shore of the Pilava Strait, the Russian port of Baltiysk is home to the main naval base of the Baltic Fleet. This involves a series of restrictions, including limited access for foreign-based vessels.

As long ago as the Teutonic and Prussian times, the Strait remained beyond the Polish control, which in turn obliged merchant ships that maintained trade relation with the port of Elbląg to pay additional duty in the Prussian port of Pilava, thus exerting a noticeable impact of the former’s profitability. Already during the reign of King Stephen Báthory, an idea was put forward to make the port independent of Prussia by creating yet another place that would enable maritime shipping through the Vistula Spit. Interestingly, even after the partitions of Poland – as a result of which both the Strait and Elbląg remained under control over the same state – subsequent arguments in favor of launching a channel digging project as the sand-rich fairway to Pilava required regular dredging. Dubbed too costly, the project did not reemerge until the interwar period, along with planned works to be performed in the vicinity of Krynica Morska. The idea eventually had to be yet again abandoned due to protests from environmentalists and local fishermen as well as considerable financial outlays. In 1949, shortly after Elbląg returned to Poland, the communist authorities stripped the town of its status as a port, therefore making all issues linked to unhindered access to the Baltic Sea no longer valid. This did not change until the post-Yalta order collapsed, prompting Poland to adopt a more sovereign approach.

The canal digging project is often regarded in merely economic terms, reviving hopes of inhabitants of both Elbląg and its adjacent boroughs, all of whom assume that transforming a small port into one of Poland’s biggest harbors will develop the region and create new economic prospects. This is related to the high unemployment rate in region amounting to 16 percent, compared to 10 percent in the Warmińsko-Mazurskie Voivodship and 6 percent in Poland. Not surprisingly, local residents believe that the digging project will contribute to restoring the region’s fragile economy. The handling capacity of the Elbląg port is currently estimated at 200,000 tons while the current ruling team has expected that both the digging project and investments planned will have boosted overall capacity to 20 million tons by 2045, which is not much less than in Gdynia. The Polish parliamentary opposition considers these estimations too optimistic, though. Due to some handling problems of Tricity seaports, it is vital to search for alternatives and if Elbląg is bound to become one of them, it needs to invest profoundly in infrastructure to ensure the proper functioning of such a large harbor.

Some have even said that Elbląg could host military facilities. Poland’s Former Army Commander General Mirosław Różański, who has been a vociferous critic of the Law and Justice government, assumed it to be the underlying cause for the project and indicated a faint possibility to establish a naval base in Elbląg and some problems related to low water levels in the Vistula Lagoon. Some have lodged objections over locating the military facility in such a close distance to the Russian city of Baltiysk.

Criticism of the shipping channel, however, concentrates on different issues, most of which are closely linked to environmental protection. Recall that Moscow has spoken up about a threat to the natural habitat, abandoning its hitherto military arguments, as exemplified by a statement by Kaliningrad’s governor Anton Alikhanov who said that Russia might even set up a reserve on its part of the spit. Also, green activists from Russia’s Green Front organization seems to advocate the idea while Polish and European critics equally draw attention to nature-related aspects. Marshal of the Pomorskie Voivodeship has pointed out the negative impact on the Vistula Spit Landscape Park and the EU Nature 2000 programme. Suffice it to say that the latter covers up to 20 percent of Poland’s overall territory whereas almost all major investments in the country are deemed to violate provisions of the programme. Polish media have broadcast protests against logging to build the canal on the Vistula Spit; also, the European Commission sent questions regarding the construction of the shipping channel to clarify all environmental concerns expressed so far.

Nonetheless, it seems that the most important argument in favor of digging the Baltic Sea canal is the issue of Poland’s sovereignty that has clearly outlined by the Law and Justice Party leader Jarosław Kaczyński. Navigation in the Vistula Lagoon cannot rely on a foreign country, which is why it is absolutely primordial to put an end to what occurred back in the times of Polish People’s Republic when Poland basically withdrew from the lagoon’s waters. Although costly, the canal digging project is essential for Poland in its pursuits to become fully sovereign, making a big step towards such reasoning while coming to a halt its painful tradition of being dependent on more powerful neighbors. Such actions will boost Poland’s image worldwide along with its ability to undertake necessary measures.

The shipping channel through the Vistula Spit will be 1.3 kilometers long and five meters deep, enabling the port of Elbląg to receive larger cargo vessels. The canal is expected to cost approximately 880 million zlotys.  Poland’s Ministry of Marine Economy and Inland Navigation has recently announced that two amber fields had been discovered along the waterway. Fortune may perhaps favor the brave.