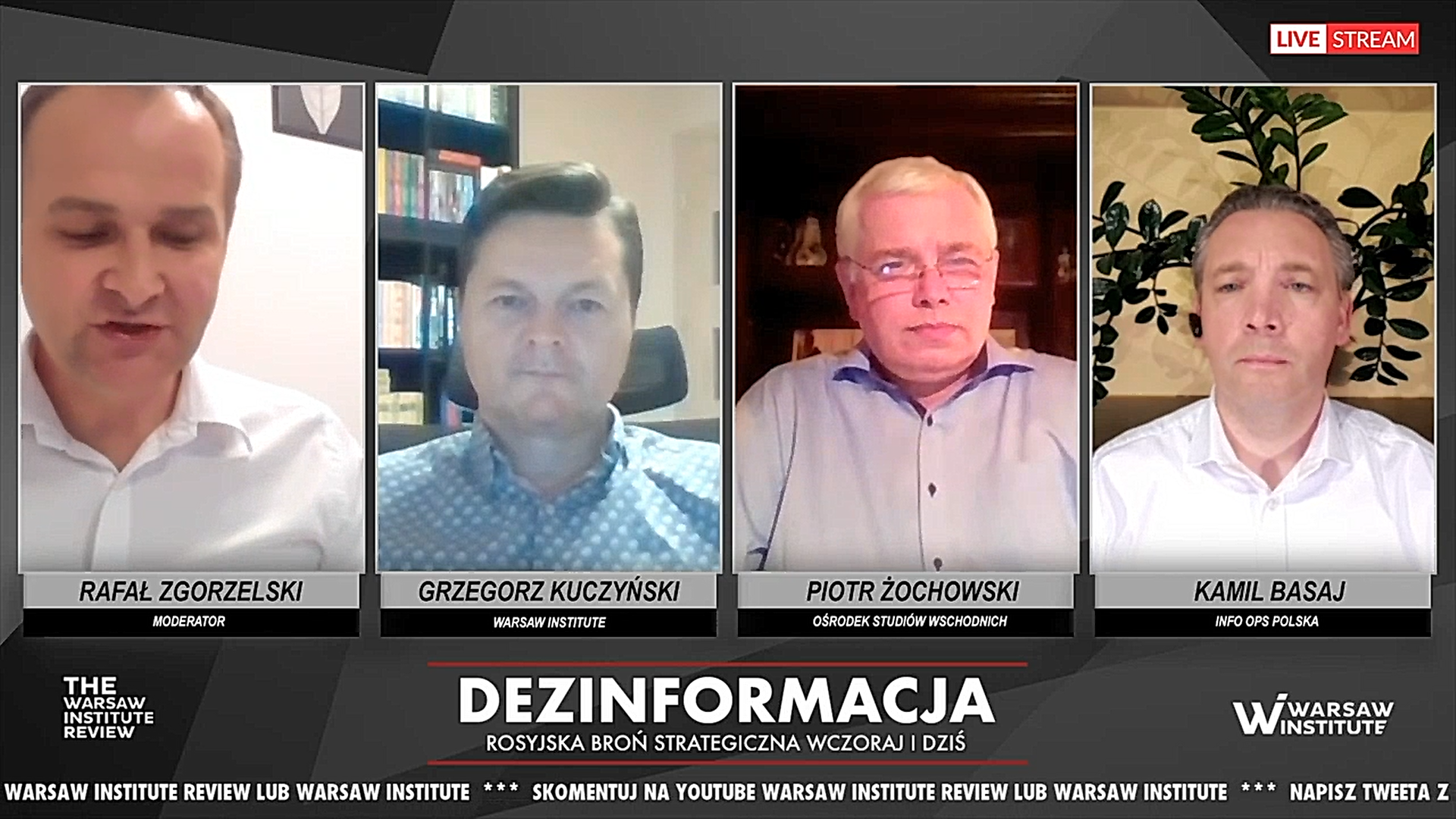 The following experts took part in the debate: Piotr Żochowski – Chief security specialist in Eastern Europe at the Center for Eastern Studies, Grzegorz Kuczyński – Director of the Eurasia program and eastern analyst at the Warsaw Institute, and Kamil Basaj – President of the INFO OPS Polska Foundation, an expert on the information environment security. The meeting was moderated by Rafał Zgorzelski.

To begin with, Piotr Żochowski presented the historical outline of the Soviet and Russian disinformation practices. He stressed how the term is understood by the Russians themselves, defined not only as misleading but also exerting a specific influence. He noted that it has always served to support official foreign policy and demonstration of strength through psychological pressure. Mr. Żochowski also emphasized that Russian activity has never been planned and conducted in the short-term, but rather for decades by building the appropriate political, social, and intellectual base.

Grzegorz Kuczyński discussed the Russian disinformation in the context of the pandemic. He analyzed the media coverage concerning the Russian ‘humanitarian aid’ offered to Italy, Serbia, and the United States. In each case it appeared as follows – EU countries are not capable of dealing with the crisis and, unlike Russia, they failed to share and offer the medical aid. However, as it turned out among those sent to Italy there were also people associated with Russian intelligence, and a set of equipment sent to the US was partially sanctioned to prove them inutile. Nevertheless, the Russian social media channels are constantly used to spread conspiracy theories about the virus.

Kamil Basaj referred to the technical and institutional aspects of the Russian disinformation war called ‘the modeling of the information environment’. He emphasized two particular aspects: a constant narrative concerning the West; NATO and the EU; as well as the current situation. He stressed that disinformation activities have been also targeted at the professional centers and their purpose is to influence the crucial decision-making processes. Mr. Basaj outlined the multi-stage distribution model of misleading information, emphasizing that the results are often calculated not for the present, but rather for the future when the manipulation is difficult to prove.

The Q&A session discussed, among others, what kind of disinformation activities might be expected in the context of the anniversary of the Polish-Bolshevik war. Grzegorz Kuczyński considered it doubtful that Poland would be indicated as an aggressor, but the topic of ill-treatment of Bolshevik captive prisoners can be discussed. Kamil Basaj was asked about the awareness of disinformation among the Polish journalists. He admitted that it has improved, but the manipulation still penetrates the nationwide media. Piotr Żochowski, when asked how Russian disinformation is institutionalized and what its subject matter is, drew attention to the regionalization of this type of activity and detailed studies of the societies they are aiming to influence. Although for the moment it is difficult to indicate which institution is the most responsible, undoubtedly the intelligence should not be underestimated.

Grzegorz Kuczyński answered another question concerning Russian disinformation activities in Africa. In his opinion, the Russian involvement in the continent is increasing, with the penetration of private and state entities. Piotr Żochowski referred to the difference between the English terms disinformation and misinformation – in his opinion difficult to distinguish and form an unambiguous definition. On the other hand, when asked about how effectively the state can defend itself against misinformation, Kamil Basaj pointed out that there are no fully effective solutions as each depends on the particular case. Undoubtedly, the efficient means of communication is important to deny false information, however, they should not engage us in the fight against shielding activities that divert attention from real threats.

« USA versus China: Rivalry for influence in Central and Eastern Europe
The USA supports Georgians »