About 100 troops and 35 tons of mysterious cargo were offloaded from Russian military aircraft after they landed in Venezuela. If the Kremlin had not decided to perform the operation in broad daylight, it might have been meant Moscow’s support for the Maduro regime, also in its fight against Venezuelan opposition. And yet, the Russians purposely publicized the event, proving Moscow’s readiness to engage its armed forces in Venezuela. The problem is, however, that the Kremlin is highly unlikely to carry out a military operation comparable to the one that took place in Syria. Putin’s bluff aims at preventing a possible armed intervention from the United States and its allies. 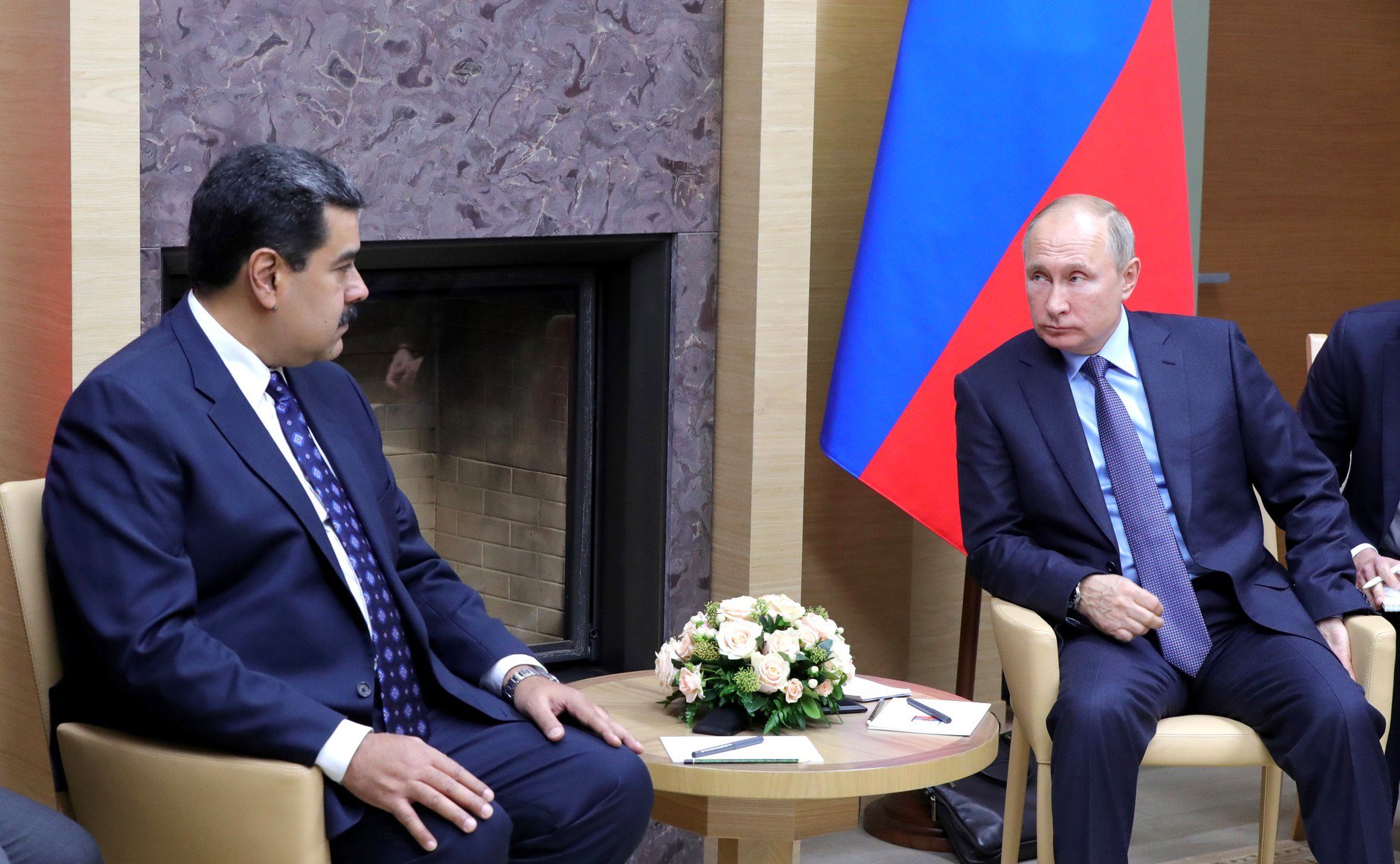 On March 23, an Ilyushin Il-62 passenger jet and an Antonov An-124 military cargo plane landed near Caracas. They left from Russia, stopping along the way in Khmeimim Air Base in Syria. As reported, both jets carried a group of 99 Russian troops, led by chief of staff of the ground forces Vasily Tonkoshkurov, and 35 tons of unknown material.

The appearance of Russian servicemen in crisis-ridden Venezuela has triggered off a sharp reaction of Washington as President Donald Trump and Vice President Mike Pence have both called on Moscow to „get out” of Venezuela and end its support for President Nicolas Maduro’s government. U.S. National Security Advisor John Bolton and the U.S. special envoy for Venezuela Elliott Abrams have stated that up to 100 Russian servicemen and thousands of Cuban troops were deployed in Venezuela where they work for local security services. An anonymous source in the U.S. administration told Reuters that Russia’s military contingent might consist of representatives of special forces. In a telephone conversation with his Russian counterpart Sergei Lavrov, the U.S. State Secretary Mike Pompeo said that the United States and its regional allies „will not sit idly by while Russia exacerbates the tensions in Venezuela.” For his part, John Bolton reinvoked the nineteenth-century Monroe Doctrine, warning that „the United States has no intention to tolerate hostile attempts to impede endeavors to implement joint efforts of the Western Hemisphere to guarantee democracy, security, and rule of law.” Russia has denied any allegations, though; Foreign Ministry spokeswoman Maria Zakharova said that „Russian specialists” were on Venezuelan soil in accordance with the provisions of the bilateral intergovernmental agreement on military-technical cooperation between Moscow and Caracas, concluded back in 2001. Russia’s military presence in Venezuela is „in strict accordance” with the Venezuelan constitution, Zakharova said. Putin’s foreign policy adviser Yuri Ushakov said in turn that „they [the Americans] shouldn’t worry about our deployments in Venezuela, they should focus on their withdrawal from Syria.”

The Russian military presence on Venezuela has sparked a wave of speculation about its purpose. According to some sources, Russian servicemen are tasked with training their Venezuelan peers how to use certain types of weapons while others point to their potentially key role in evacuating both Maduro and the Russian embassy if the situation in the country dramatically deteriorates. Also, they are believed to prevent attacks on Russian diplomats, like the one that occurred in 2012 in the Libyan city of Benghazi, as a result of which the U.S. ambassador was killed. Also, Russian military jets delivered cybersecurity experts to Venezuelan soil who are to conduct an information-operation campaign on the Internet, with particular regard to social media as Moscow claims that Washington and its allies have been committed to making the large-scale propaganda preparations to overthrow Maduro. More importantly, they are supposed to protect civilian facilities and critical infrastructure. This has come as an immediate response to cyber attacks on Venezuelan power plan, with Russian experts playing a key role in preventing further blackouts and safeguarding the country’s crucial oil facilities. Russian troops were deployed in the Venezuelan city of Ciudad Guyana, considered extremely important for the national electricity sector. It also hosts the headquarters of CVG Edelca, Venezuela’s main electricity producer. Also, the area contains two dams Tocoma and Guri, known as the Simón Bolívar Hydroelectric Plant, the world’s fourth-largest hydroelectric power station in terms of generation capacity.

Most importantly, the arrival of Russian troops in Venezuela has been a well-publicized event, a „demonstration of Moscow’s intentions and capabilities” focused primarily on the United States. Moscow’s further steps show that it has no intention to make any concessions while defending the Maduro regime. Russian decision-makers seem to believe that Washington eventually rethinks its „regime-change strategy pursued via Twitter” and equip the Venezuelan opposition with weaponry, giving it a possibility to overthrow Maduro. This is why Moscow has decided to send its troops in Venezuela.

Is the Kremlin able to repeat the „Syria scenario” in Venezuela? In Washington, some fear that Russia may do the same it did in Syria; in August 2015, it deployed a small fighting force to Syria in support of President Bashar al-Assad, a move that eventually finished with carrying out a large-scale military operation and establishing two bases in the country. This will not happen in Venezuela, though, because Russia’s armed forces seem too weak to be able to engage in a serious military commitment in Latin America. Suffice it to compare the distance between Russia and Venezuela and that between the former and Caracas. Also, Venezuela is located in the vicinity of the United States and enclosed by Brazil and Colombia, both of which have recognized Juan Guaido as president and dispose of the most powerful armies in Latin America. Washington’s fears are shared by Canada and the Lima Group of Latin American countries: Colombia, Brazil, Argentina, Chile, Paraguay, Costa Rica, Guatemala, Honduras, Panama, and Peru.

The Kremlin can do nothing more but backing chavists as it did it in the 1980s when Nicaragua’s Sandinistas fought fierce battles against U.S.-aided guerrilla forces (contras). Experts say that the „reconnaissance group”, which landed near Caracas on March 23, was in fact tasked with conducting reconnaissance activities as well as preparing Venezuelan army for a potential invasion of U.S. special forces. Not incidentally, General Vasily Tonkoshkurov, a 59-year-old Afghan and Syrian wars veteran, was among troops delivered to Syria. interestingly, Russian reacted in a similar manner when a wave of riots sparked in Kiev against President Viktor Yanukovych. Back then, Moscow regularly deployed its advisors to help Ukrainian authorities to put down the riots.

As reported by the Cuban media, the arrival of the Russian experts was apparently initiated by the vice president of Venezuela’s ruling party, Diosdado Cabello, perceived as a person with huge ambitions and once seen as heir to Hugo Chavez. Possibly, a scenario is prepared, under which Maduro is forced to step down while his Cabello – as his successor – will declare a new political opening in the country, perhaps also agreeing to negotiate with the opposition.

Russia is currently doing its utmost to prevent the Maduro regime from collapsing as the Kremlin continues to expand its zone of influence in the Western Hemisphere. Maduro’s demise, followed by Caracas’s reorientation towards pro-American policy, will trigger great losses for Moscow’s Latin American allies, with Cuba at the forefront. Furthermore, Moscow’s involvement in Venezuela is triggered by the Kremlin’s fear to lose billions of dollars invested by Russia’s state-run Rosneft to save Venezuelan domestic oil sector. Venezuela’s domestic conflict constitutes for the Kremlin yet another area for rivalry against the United States. Russian officials have accused Washington of making several attempts to trigger a „color revolution”, a move that would ultimately make Venezuela America’s regional vassal.

Moscow provides Maduro’s regime with essential support via both diplomatic and informal channels, the latter of which seems best evidenced by facilitating all activities related to military counseling and trading gold reserves. If the fall of Maduro’s rule was just a foregone conclusion, the main goal is to prolong the regime’s agony while fuelling the political turmoil in Venezuela, all of which would ultimately lead to a collapse of the country’s oil sector. Further, it would be profitable to make its recovery process and export restoration last as long as possible.