Georgians Took to the Streets

A wave of demonstrations sparked in Georgia, a country located in the South Caucasus. Mass protests broke out over anti-Russian sentiment yet soon exemplified to no lesser extent people’s infuriation with the policy pursued by Georgian Dream, a political party that has ruled the country over the past six years. Though many would be eager to eye what happened in Georgia as a revolution, a sudden change of power seems unlikely, at least now. 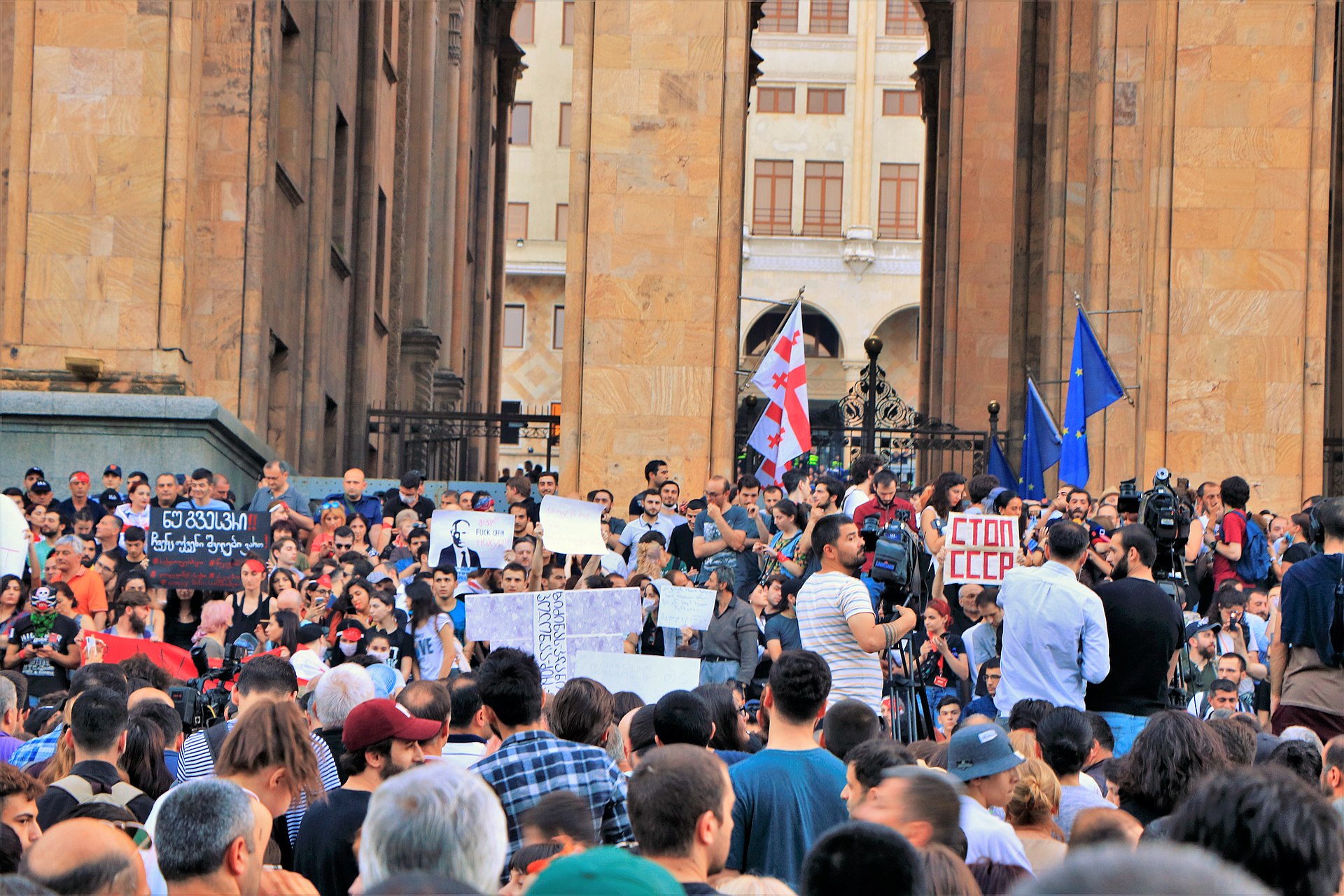 The protest rallies in Tbilisi erupted after Russian Duma Deputy Sergei Gavrilov addressed Georgian lawmakers while seated in the chair of the Georgian parliamentary speaker (sic!). This was possible because Gavrilov serves as the chairman of the Interparliamentary Assembly on Orthodoxy, a body set up to bring together lawmakers from 20 Orthodox countries, with a meeting being held in Tbilisi in June this year. As it turned out, representatives of the ruling camp, which de facto held responsibility for hosting the meeting, failed to prevent a Russian politician, as an official delegate of the Russian Federation occupying in fact 20 percent of Georgian territory, from sitting in the honorary tribune in Georgia’s most important buildings. This prompted Georgian opposition lawmakers to block the presidium on Thursday, June 20, while thousands of enraged people gathered spontaneously in front of the parliamentary building.

Later that same evening, the situation on the streets of Tbilisi clearly slipped out of control, with the crowd, driven by Georgian opposition politicians, calling for snap elections and the resignation of the ruling camp while trying to storm parliament in an effort that prompted Georgian services to take more decisive action. Police used tear gas, water cannons and fired rubber bullets to disperse the crowd, prompting the latter to throw bottles and stones. Opposition lawmakers failed to control the situation, letting it evolve from a peaceful gathering into riots. 305 people were arrested and 240 were injured. At least two people lost eyes after police opened fire using rubber bullets.

Despite massive crackdown during the first day of rallies, further demonstrations took on an overwhelmingly peaceful character. It is noteworthy that demonstrators, who unequivocally slammed the possibility of using violence, claimed to have had no ties to provocateurs and… Georgian opposition. In fact, Georgians feel to a great extent disappointed with both the ruling team and the entire political elite. As openly declared already during the second day of the protest rally, the riot should have first and foremost remained apolitical, with a postulate to label what took place in the capital as the “Youth Revolution.” But the opposition-backed agenda was maintained, taking into account the resignation of Interior Minister Giorgi Gakharia and the holding of snap parliamentary elections with a proportional electoral system.

What ignites most of those who follow the Tbilisi unrest is whether and to what extent the Russian Federation held a keen interest in destabilizing the domestic situation of its South Caucasus neighbor. Although there is no doubt that what took place in Tbilisi could offer some benefits to Moscow, the Kremlin cannot be necessarily referred to as the only one behind recent tensions. Russia must have calculated that the presence of its lawmakers in the Georgian parliament would stir riots. The key is that Georgian authorities are to be blamed for how the event’s agenda was drafted.

The goal of Russia, a country that in fact exercises control over Abkhazia and South Ossetia while viewing the South Caucasus as within its sphere of influence, is to destabilize pro-Western Georgia and measurably weaken the state. Not surprisingly, the greater the chaos in Georgian politics, the more distant is the country’s already vague prospect of joining NATO and the European Union. What was significant in this context was that Vladimir Putin’s decision to halt passenger flights from Russia to Georgia came not right after closing the meeting of the Russian Security Council but in the evening, corresponding with the moment when the largest crowd was rallying in front of the parliament. Perhaps it was just a coincidence or a well-designed measure targeted at exacerbating sentiments among Georgian protestors.

Revolt, but not revolution

Regardless of what stood behind the rallies, the key issue is what consequences they could have. With the demonstrations still taking place as I am writing the following article, Georgia’s social unrest is yet unlikely to deepen into a real revolution. Though crowds took to the streets to Tbilisi and other Georgian cities, though to a lesser extent, political effects of their outrage remain relatively limited, with no signs of meeting their demand of snap elections. But personal reshuffles so far admitted by the Georgian Dream party will not necessarily bring any breakthrough to the case.

So what will remain after the June social revolt in Georgia? First, most attention is drawn to tensions between Tbilisi and Moscow running high for the first time since the ruling camp has come to power. And secondly, Georgia’s stirring crisis was proof that Tbilisi, alongside other countries of the region, feels increasingly tired of the political class in power. But in order to speak about a real breakthrough in Georgia’s policy, it is crucial for the new leaders to take the floor in a bid to manage widespread social discontent. And this presents an even more significant challenge that merely to take the crowd to the streets.