The United States and Sweden during the Cold War: Part 2

In the Cold War period, Sweden had de facto three foreign policy choices. First, to yet again attempt to cooperate with the other Scandinavian states more closely. Second, to join NATO, which would be a rather sudden move. Third, to continue the policy of non-alignment, the effectiveness of which was contingent upon the decisions of the two dominant superpowers. 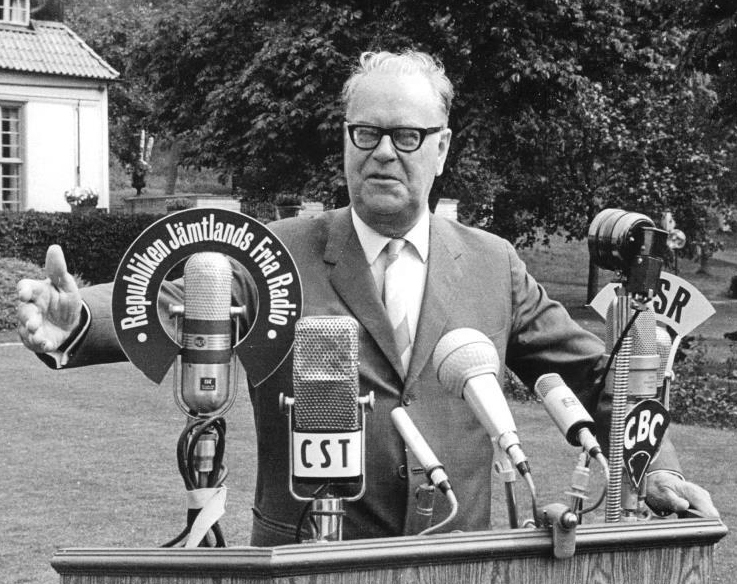 Between East and West

Talks on the establishment of a political-military cooperation among Oslo, Copenhagen, and Stockholm – a Scandinavian defensive union to be specific – ended in 1949, almost as quickly as they had begun.[i] There were several reasons for this, the most important being geographic location, bilateral relations with countries other than the Nordic ones, and a different approach to security policy. Denmark and Norway sought close cooperation with the then planned North Atlantic Alliance. However, this was not in line with the standpoint of Stockholm, which did not want to irritate Stalin.

In Swedish military circles, a popular solution for implementing security policy was that Sweden would join NATO. However, the political elite was against this idea and no politician was officially in favor of joining the Alliance. Nevertheless, political and military partnership with the West was not ruled out.[ii]

The greatest advocate of the Swedish policy of non-alignment, and its main proponent after World War II, was the Swedish Minister of Foreign Affairs Östen Undén. A policy of non-alignment offered the best chance of maintaining neutrality in the event of war. In addition, it was already a proven way of conducting foreign policy that promoted the country’s economic growth and provided ample opportunities for cooperation with other countries.

In 1946, Tage Erlander became the Prime Minister of Sweden. Together with Minister Undén, they began to strengthen political and economic ties with the West. Sweden’s status as one of the founding states of the Organization for European Economic Cooperation, which also involved joining the Marshall Plan, can serve as an example of how the goals of Erlander and Undén were realized. The Swedish government was balancing between Moscow and Washington, simultaneously trying to get closer to the US without irritating the Soviet Union. The Swedish Defense Staff coordinated military cooperation with its American and British counterparts.[iii] Initially, the West knew even the Swedish defense plan. Intelligence cooperation was likewise continued.

However, Swedish operations were conducted through individual contacts with NATO members, not directly with the Alliance as a body.

In 1948, the United States became strongly against arms exports to neutral states. Britain’s policy was quite different. By exporting arms to Sweden, London not only moved closer to Stockholm economically and politically, but also strengthened a potential ally.[iv] In 1951, British Secretary of State for Air Arthur Henderson arrived for talks with the government in Stockholm. The visit was intended not only to dispel doubts about the recent economic issues, but, more importantly, to make the Swedish government fully aware that without accurate plans for Swedish defense, the West would not be able to help it in the event of war. A few months after Henderson’s visit, Swedish Defense Minister Allan Vougt sent a memorandum containing war plans, organization, strength, and general data on the Swedish Armed Forces to London.[v]

The talks between Sweden and Britain did not escape Moscow’s attention. The USSR was aware that Swedish neutrality would by no means mean impartiality. Yet, it was important that Stockholm’s policy of non-alignment would last as long as possible. Stockholm, not wanting to further deteriorate relations with the USSR, decided to postpone bilateral talks with the British. The British government did not share the information acquired from the Swedes with the Americans. It is true that the Eisenhower administration was informed about some behind-the-scenes discussions with Stockholm, but for that moment they had to have such character and the US President agreed to it. As an experienced military man, Eisenhower knew how Sweden’s geopolitical position was important to NATO.[vi] In turn, Erlander feared that a significant political and military rapprochement with London would undermine the credibility of Sweden’s policy of neutrality and leave no other option but to engage, and perhaps even join NATO.

Late 1951 saw a breakthrough in the protracted negotiations over Swedish participation in the COCOM embargo on strategic goods and cutting-edge technology for the Eastern bloc, led by the US.[vii] As a result of the agreement reached at that time, the US policy toward Sweden changed. The importance of Sweden’s potential membership in NATO was still acknowledged, but the Swedish policy of avoiding military alliances was accepted.

After Stalin’s death in 1953, there was a thaw in international relations, and the postwar political tension was no longer so noticeable. By the mid-1950s, Moscow recognized Swedish neutrality and Nordic cooperation (the Nordic Council). Moreover, pressure from NATO member states for close military cooperation with Sweden diminished. They have also decided to respect the policy of non-alignment. At the same time, they left the door open for Sweden’s future accession to the Alliance, stressing that a battle for Denmark would also be a battle for Sweden.

The main role in the defense of Zealand and NATO’s northern flank was assigned to West Germany. Nevertheless, the US interest in Sweden and defending Scandinavia was becoming more and more apparent. The long-term commitment of the United States was reflected in the 1960 Report of the US National Security Council (NSC 6006/1).[viii] This statement was favorable for Sweden, as it could still pursue its policy knowing that it would be protected by the US.

In the late 1960s, the Swedish Social Democrats abandoned the idea of obtaining nuclear weapons, nonetheless, this issue was not fully resolved. The government assumed that if it had American protection, the US nuclear umbrella would also shield their country.[ix] Sweden’s Minister of Foreign Affairs announced the “Undén Proposal,” in which he argued that states without nuclear capabilities should announce the abandonment of plans to manufacture, store, and acquire nuclear weapons in any way. This proposal was adopted by the United Nations General Assembly, as a United Nations resolution. The emphasis was still on the deterrence and the promotion of peace, but it was the notion of “marginal deterrence” that slowly gained more and more advocates.

The continuous rule of the Social Democrats ensured political balance in Stockholm. Nevertheless, the direction of Swedish politics had been changing as a result of ongoing events. There was no clear and long-term unity in this regard until the late 1960s. This was meant to change thanks to a young but long-time collaborator of Tage Erlander. A disciple of Swedish neutrality policy who put it on a more active track. His name was Sven Olof Joachim Palme.