Political Change in Ukraine: What’s Next with Ukraine’s Donbas Conflict?

Ukraine’s recent elections have yet again brought up the issue of settling conflicts in the eastern part of the country. But is Volodymyr Zelensky, Ukraine’s new president who had won a sweeping victory in both presidential and parliamentary races, capable of bringing peace in the midst of the ongoing dispute? Will he step up to Russian efforts aimed at maintaining the region within its sphere of influence? 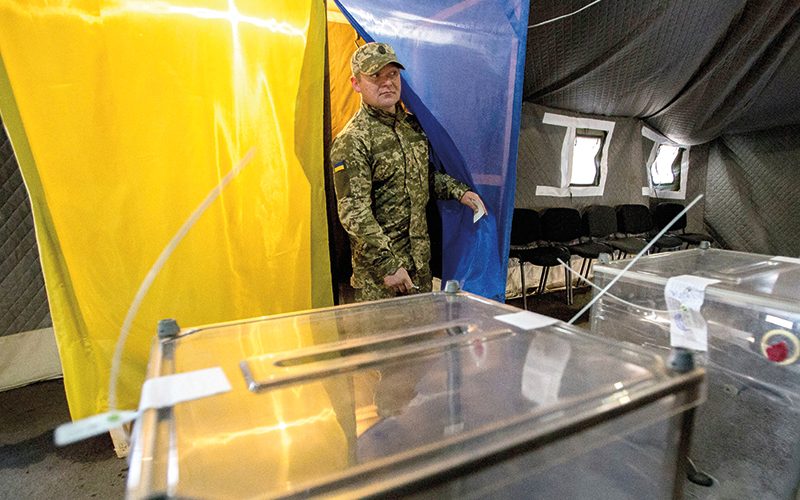 The history of the conflict

The conflict in Donbas broke out in 2014 after Ukraine’s pro-European opposition forces won a landslide victory in the Euromaidan revolution, a popular movement that eventually ousted President Viktor Yanukovych. The public outcry sparked in response to the violent dispersion of protestors who rallied against Ukraine’s refusal to sign the Ukraine-EU Association Agreement. Electing a new pro-European government led to the outbreak of armed conflict in Ukraine’s eastern regions of Donetsk and Luhansk, where most of the residents were in favor of strengthening integration processes with the Russian Federation, enjoying all actions taken by Donetsk-born Viktor Yanukovych. Another simmering area was the Crimean Peninsula, de facto annexed by the Russian Federation.

In the 2014 Crimea status referendum, the majority of local people voted for incorporating the Autonomous Republic of Crimea into the Russian Federation, with the international community seeing the event as illegitimate. The 2014 referendum took place after Moscow had performed a series of active measures, deploying its special forces (later referred to by international outlets as „little green men”) to Crimean soil. Ukraine’s regions of Luhansk and Donetsk saw the proclamation of the Donetsk People’s Republic (DPR) and the Luhansk People’s Republic (LPR). These self-proclaimed quasi-state structures failed to be recognized by any country of the world, including Russia. Though Moscow has officially denied having sided secessionist rebels in the conflict, the people’s militia of both DPR and LPR host many Russian volunteers. Their political system relies on Russian representatives, among whom were General Vladimir Antyufeyev, who in 2014 had been delegated from Transnistria to Donetsk and nominated as deputy prime minister, or Igor „Strelkov” Girkin, DPR’s foreign minister and a former colonel in Russia’s FSB intelligence service.

The conflict in Ukraine’s Donetsk and Luhansk regions is still in its active phase, preventing it from being classified as a „frozen conflict”. Ukraine’s eastern parts still see a firefight between the Ukrainian side and separatists. Also, the boundary between rebel-controlled and Ukraine-controlled zones has not yet been delineated, as in the case of the Transnistrian secessionist conflict. Back in 2014 and 2015, political efforts were made in a bid to settle the Donbas crisis by launching the Normandy format, a group of diplomatic representatives from Ukraine, Russia, France and Germany. The joint initiative sought to control the peace agreements on Donbas, concluded in Minsk, where talks were being held. Under the 2014 Minsk-1 peace deal, and its addendum Minsk-2 (2015), both parties to the conflict were obliged to declare a total ceasefire and to withdraw their artillery systems from the line. Ukraine’s peace talks with secessionist rebels were expected to take place while respecting the territorial integrity of the country. Although not having been terminated by either party, the Minsk accords did not lead to a ceasefire. Recent years have not seen any major political initiative that could resolve the conflict.

In March and April 2019, Ukraine eyed two rounds of the presidential vote that ended in a landslide victory of Volodymyr Zelensky, a former comedian and film producer. With more than 70 percent of all votes, the comedian-turned-politician scored best of all Ukraine’s presidential elections. In July 2019 parliamentary vote, his party, Servant of the People (Слуга народу) was in the lead, getting a majority in Ukraine’s Verkhovna Rada. The Opposition Platform-For Life party (Опозиційна платформа — За життя) came second, garnering most votes in Ukraine-held territories in the regions of Luhansk and Donetsk. Referred to as a pro-Russian political group, the party seeks to reach a deal with both separatists and Russia. This explains the high popularity of the party, whose electorate lives by the front line, voting for parties that seek reconciliation with the rebels.

President Zelensky has declared to break a standoff over the conflict in eastern Ukraine, committing himself to initiate a dialogue to Russia in a bid to release Ukrainian sailors. A group of seamen has been held in captivity since November 2018, after their vessel was seized by Russian forces in the Kerch Strait running from Russian-occupied Crimea from the territory of the Russian Federation. Also, Zelensky hopes to restore peace talks through the Normandy format.

Ukraine’s new president, a comedian with no prior political experience, seeks to find the right political base to fulfill his promises. Zelensky, who has close ties to a business titan Ihor Kolomoisky, represents a diverse political milieu. His term in office seems to be marked by the continuation of the oligarchic system, which gives rise to an idea that his negotiating position over Donbas will derive from the interests of oligarchs who represent the current authorities while having nothing to do with a plan developed by presidential advisors.

From Moscow’s perspective, electing Zelensky as Ukraine’s next president may be a beneficial step. Russia may see Zelensky’s lack of political experience as an asset in the talks with Kiev. But Ukraine’s new leader began his term in office from visiting several Western capitals, including Paris, where he emphasized how important for his country is to develop integration processes with Europe. What seems the president’s next advantage is that he distanced himself from some historical issues, as commemorating the Ukrainian Insurgent Army (UPA). Petro Poroshenko, Zelensky’s predecessor, referred to the heritage of Stepan Bandera and his paramilitary formation, which led to adding it as an element of Russian propaganda, under which modern Ukraine was allegedly a fascist state.

With an overwhelming majority in the parliament and the image of a center-orientated politician, Zelensky may have at his disposal more tools than his predecessor to solve the conflict in Donbas. But what narrows down Kiev’s influence in the region is Moscow’s political support for pro-Russian separatists and Ukraine’s lack of control over the border alongside the rebel-occupied territory. In a long-term perspective, the conflict in Donbas is likely to enter a stage comparable to that of Transnistria. Russia’s primary goal is to maintain the region within its sphere of influence while considering the people’s republics in Donetsk and Luhansk as parties to the Ukrainian conflict. Such a scenario assumed the possibility of exercising indirect impact on the Ukrainian political stage, as this is the case of a dispute between Moldova and Transnistria.

Author:
Jakub Lachert – a PhD candidate at the Faculty of Political Sciences and International Studies at the University of Warsaw. His research interests include: European Union neighborhood policy, including, in particular, Eastern policy, Eastern Partnership, Western Balkans in the process of integration with the EU.

All texts (except images) published by the Warsaw Institute Foundation may be disseminated on condition that their origin is stated.