Is the European Union Turning Away From the Western Balkans?

At the General Affairs Council meeting on October 15, 2019, in Luxembourg, an unfavorable decision was delivered as for the opening of accession negotiations with the two Western Balkan countries: Albania and North Macedonia. Potential EU membership talks have been blocked for the third time so far, in the light of a veto from France, the Netherlands, and Denmark. The states’ decision does not run in parallel to the stance adopted by the European Commission that issued a recommendation to open accession negotiations. Later on, Paris, teamed with Copenhagen and The Hague that followed suit, reiterated its claims at the European Council summit on October 17-18, 2019. 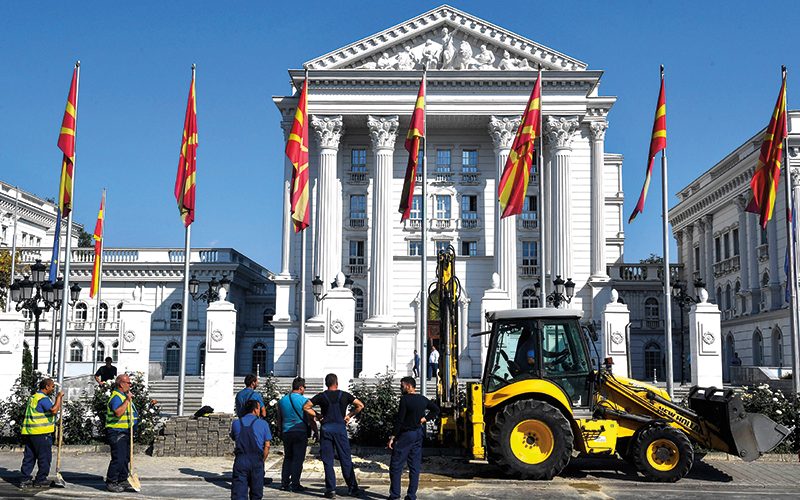 While putting forward arguments in favor of its negative stance on launching accession negotiations with Albania and North Macedonia, France said that the negotiating process lacks accuracy and consists of subsequent chapters being opened without further reflection upon the procedure itself. This position might have stemmed from France’s fears over repeating the Bulgarian and Romanian scenario, as these two failed to push forward adequate reforms at the time when their respective negotiations were underway.

Preventing the two Western Balkan countries from launching accession talks also has its source in Paris’s stance on reforming the entire European Union. French state administrative institutions claim that any issues pertaining to forthcoming EU enlargements should be preceded by EU-wide reforms introduced within the bloc.

But Paris has also made clear its view, albeit unofficially, that North Macedonia is not ready to join the bloc. Furthermore, Paris attempted to split the negotiating process, allowing further talks with Tirana while impeding those with Skopje. Nevertheless, the majority of EU Member States spoke out against France’s idea.

For its part, the Netherlands also attempted to separate Albania’s case from that of North Macedonia, and The Hague was against opening talks on EU accession with Albania. The Dutch administration said that the Tirana government so far had not taken relevant action in the fight against corruption and organized crime.

The Netherlands’ Central and Eastern European peers –– along with Austria, Greece, Germany, and Italy –– argued that talks on EU accession are vital for the European Union to grip control of democratic reforms advanced in the two countries.

Reactions across Albania and North Macedonia

Neither North Macedonian nor Albanian policymakers eagerly welcomed the European Union’s refusal, and their regret seemed primarily channelled on their earlier efforts to conform to a list of the preconditions set by Brussels.

The EU’s objection raised the ire of Skopje, especially given that the country had changed its official name to North Macedonia in a bid to override Athens’ veto on its further EU membership aspirations. This came as a critical precondition made by Greece whose policymakers argued that the name “Macedonia” applied to the Greek heritage of Alexander the Great, thus banning the country with its capital in Skopje from the use of “Macedonia” as its formally recognized moniker. The ruling to rename the country yet received an objection from a group of North Macedonian nationalists and challenged the state’s decision-makers, since then imperiled with treason accusations. Changing the country’s name served international interests of North Macedonia that sought first and foremost to pave its way for joining the European Union and NATO.

As for Albania, it has also made vital steps to amend its judiciary system –– dubbed most corrupt across the Western Balkan countries. But these efforts are not sufficient –– as the majority of EU Member States say –– though with accession talks being underway, this process could gain fresh momentum.

Therefore the European Union’s red light for formally discussing the two countries’ membership ambitions may trigger political reshuffles in the Western Balkan states as their chagrin could create an opportunity for Russia, China, and Turkey to advance their own agendas.

Political changes within the Western Balkans pertain directly to the European integration process. A declaration on the region’s forthcoming EU membership came at the 2003 EU-Western Balkans Summit in Thessaloniki in a move that the Western Balkans saw as a stabilizing element. All countries across the area boasted bright membership prospects, with their political goal explicitly established, though they needed first to meet a set of vital preconditions. Once accession negotiations were opened with Montenegro and Serbia –– in 2012 and 2014 respectively –– many eyed the launching further talks with the remaining countries as a next step. The EU’s October 2019 decision to obstruct accession talks for Albania and North Macedonia is seen as somewhat the bloc’s politically turning away from the region. This prompts an incomprehensible shift in the EU’s position, especially given that Brussels has gotten involved in the Berlin Process, an initiative established back 2014 to boost energy and infrastructure-related cooperation among the Western Balkan countries.

The driving force behind the next chapter in amplifying the EU’s regional presence would be the go-ahead for opening accession negotiations with subsequent countries. The declaration to start membership talks should serve as the very first step in the states’ long path to EU accession. But the opening of accession talks should not be deemed to give any warranty for candidate countries.

The EU’s barring Albania and North Macedonia from starting negotiations may sow political instability both in these countries and across the region. On a tide of dismay with the policy pursued by pro-European circles, these states might soon witness the triumph of nationalist groups that hope to see their countries outside the Euro-Atlantic world. Similar political sentiments could promote Russia’s political presence, with Moscow’s attempts to restrict EU and NATO’s regional clout being stronger than ever. For the same reason, also China and Turkey could feel invited to set foot in the Western Balkans, offering some economic prospects.

From an EU perspective, political instability throughout the Western Balkan region may end up with heightened threats for the entire bloc. With smoldering conflicts or the region’s political volatility comes a mass influx of migrants heading from these states straight into the European Union. The countries are located at an intersection between the Middle East to Western Europe, a key “refugee route” traversing Turkey, Greece, and Bulgaria. Lack of a common position on refugees may spark off further crises, as was already the case in 2015. Situated at a crossroads between Northern and Southern Europe, the Western Balkans are a vital partner for the European Union in implementing joint infrastructure and energy projects.

All in all, Brussels made a mistake when it blocked membership talks with North Macedonia and Albania. Launching negotiating efforts with these countries would only intensify the EU’s political control of the region. A mere start of talks is not tantamount to the country’s joining the European Union, though. Excluded from taking part in further accession talks, pro-Western elites in both Skopje and Tirana have lost trust in the European Union, as they earlier had believed that subsequent reforms would pave their way for the EU rapprochement.