Recent months have brought a heated discussion over the Justice for Uncompensated Survivors Today (JUST) Act, or Act 447. Adopted by the U.S. Congress, the law provided for Washington’s diplomatic efforts to help restitute Jewish properties to Holocaust survivors. Also, the act has raised the ire of the Polish diaspora in the United States while having surfaced right in the run-up for Poland’s local government elections. Few months have passed since, the issue has gone quiet in the media, but it is worthwhile to draw attention to the law itself, its nature as well as the stance of the Polish government. 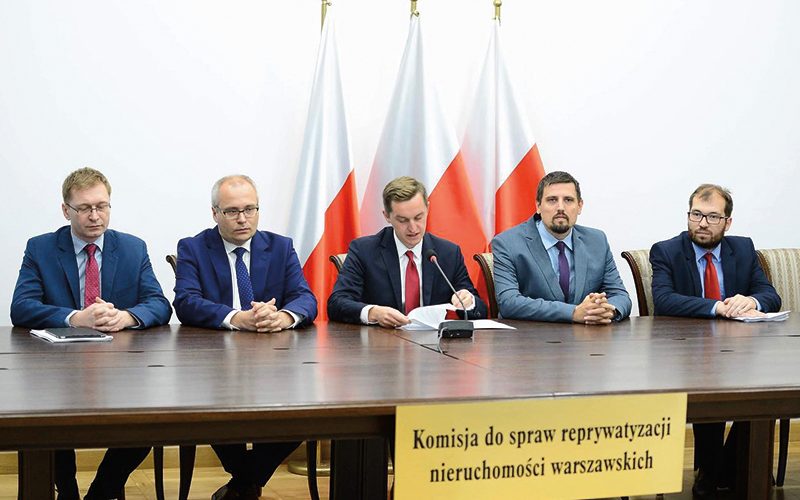 Act 447 is addressed to the U.S. government and serves as a legal basis for the Secretary of State to submit a report on the legislation of countries where there has emerged a problem of unlawful seizure of assets from Holocaust survivors. As for Central and Eastern European countries, this stems from widespread Communist-era nationalization that affected entire societies, and not only those who survived the Holocaust. A document that shall determine the legal scope of restitution while being as a point for reference for the U.S. Secretary of State is the 2009 Terezin Declaration, a document calling for taking appropriate actions regarding the return of unlawfully seized assets, including heirless property. It may be noted that the Terezin Declaration is non-binding for Poland, being merely a declaration of countries that participate in a conference on the need to take actions concerning the return of Jewish assets. At the meeting, Poland was represented by Władysław Bartoszewski, sent there on behalf of the Civic Platform government.

Heirless property is what stirs up the greatest controversies. There has developed a legitimate feeling that eighty years after the outbreak of World War II, Poland has neither moral nor legal obligation to pay those damages to the victims of the war because it left the war dramatically ravaged, with a epic death toll of almost 6 million Poles, of which three million of Jewish origin. Germany never paid war reparations to Poland for all losses it had suffered in World War II, so why would Warsaw be now obliged to compensate the victims of German aggression? Naturally, treating the issue in this way has excited indignation in Poland. In the wake of World War II, communists claimed assets of all Poles while those who managed to survive its hardships had the burden of rebuilding the country on their shoulders. Millions of Poles did not live to see compensations for property that had been taken away.

Since there broke out a discussion as to Act 447, the Polish government has adopted a firm and hardline stance. Under an indemnity agreement, signed back in 1960 by the United States and the Polish People’s Republic, Poland has no obligations to the United States while the matter of heirless property was further specified in details in Polish civil law. According to the Napoleonic Code, until 1947 heirless assets descended to the Treasury while subsequent civil regulations also pointed to the Treasury as a body entitled to the property with no other heirs. It is worthwhile to note that the whole population of three million Jews – slaughtered by the Germans – were Polish citizens, which is why other countries shall have no legal claims to their property, destroyed or ruined, as was the fate of most of the dwellings in post-war Warsaw.

Since 2017, thus sometime before Act 447 was adopted, the issue of heirless property has been of great interest of Poland’s verification commission, chaired by Sebastian Kaleta, a Polish civil servant, member of a local government, lawyer and legal advisor, who has served since 2019 as a Secretary of State in Poland’s Ministry of Justice and chairman of the verification commission that is examining irregularities in the Warsaw reprivatisation process. As for the very first cases of claiming properties back in downtown Warsaw by so-called “curators”, the commission made it clear in its decisions that the question of heirless assets is blatantly delineated by Polish law while not being subject to any third-party claims.

Given the above arguments, it is clear that Act 447 will by no means negatively affect Polish law and the matter of property restitution. It is to be added that the American side has not brought forward any expectations for Poland to hand heirless assets back to any specific entities. Nevertheless, what seems encouraging in the whole discussion is an attitude of the Polish diaspora in the United States whose members have not forgotten their homeland while safeguarding Poland’s vital interests on American soil. Having gained such necessary support from the Polish diaspora, I am deeply convinced that joint efforts undertaken by Polish society and the Polish government will prevent Poland from compensating for post-war losses incurred by Germany. The ongoing debate seeks to simultaneously allow Poland to remind that it has never been paid relevant reparations for what it had suffered.

Author:
Izabela Wojtyczka – Vice President of Warsaw Institute. A graduate of the Faculty of Political Sciences and International Studies at the University of Warsaw and Economics at the Warsaw School of Economics. Scholarship holder of Pázmány Péter Catholic University in Budapest. In the past, professionally associated with the energy market and think tanks sector.

« No Chance of Breakthrough on Nagorno-Karabakh
French Reset »