Georgia Is Tilting Towards Political Turmoil

Newest polls found that only a dozen or so percent of Georgian citizens see their country going in the right direction. On the one hand, a change in power in the next year’s general vote is likely to happen if the Georgian political stage witnesses the birth of the long-awaited “third political force.” But, on the other hand, overwhelming social discontent, especially in the face of weak opposition and tensions going high with neighboring Russia, runs the risk of derailing the state’s current stability. 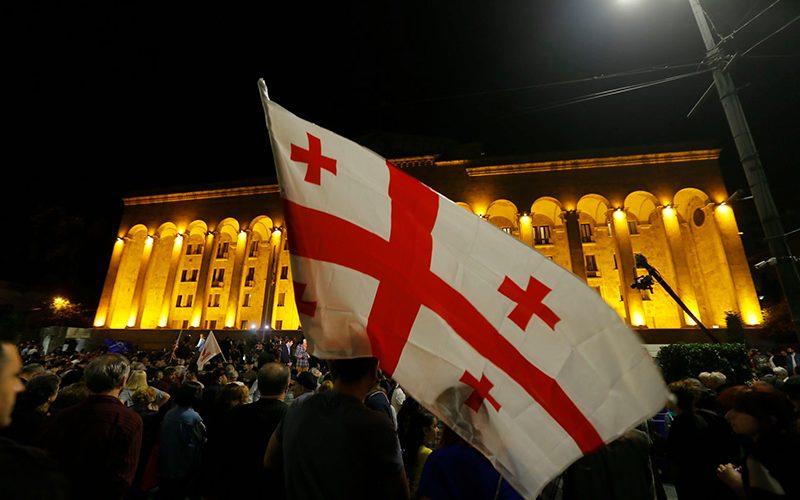 Referred to as the symbolic beginning of a high-risk period in Georgia is a wave of massive anti-Russian and anti-government rallies that swept throughout the country in June this year. Before, social dissatisfaction had been mounting for a long time, a tendency that was chiefly due to Georgia’s poor economic condition, but also, albeit to a lesser extent, because of non-transparency of the Georgian Dream party whose chairman Bidzina Ivanishvili is the country’s unofficial leader. Despite this, the June events served as a factor that depicted the full scale of all existing problems. Also, they gave Russia a comfortable opportunity to launch more or less successful attempts to ignite moods within members of Georgian society, examples of which were the suspension of direct flights from and to the two countries or the threats to put an embargo on Georgian wine imports. But then, to what extent is it possible to destabilize Georgia any further?

What stands out as the first factor is the general vote, scheduled to take place in the autumn of 2020, combined with tense sentiments within the ruling party’s structures. The Georgian Dream party has for many months faced allegations mounting high from the public while seemingly running into thorny problems at home. In consequence, recent weeks have seen a personal reshuffle, with the fifth prime minister taking office since the incumbent ruling party came to power. Former minister of internal affairs Giorgi Gakharia was appointed to the post although thousands of protesters demanded his dismissal this summer.

Picking such a controversial politician as Georgia’s prime minister may come as a surprise, but what seems to explain this peculiar choice is the Ivanishvili’s drive for retaining control of what will next happen in the country. Gakharia is among his most trusted people, and his tenure as Georgia’s prime minister is likely to show Ivanishvili that he will have no intention to give in in the fight for victory in the next year’s vote while pledging loyalty to the party leader. Despite all that, Georgia’s new prime minister has polarized society and fuelled up anti-government protests.

Added to this is the weakness of opposition groups; the United National Movement, or Georgia’s top opposition political party, is still viewed through the prism of its former leader Mikhail Saakashvili, a somehow burdensome situation due to his strongly negative electorate. Sooner or later, on the country’s political stage will emerge a niche, with someone taking efforts to fill it out. If, however, any popular-supported political group fails to be born, a newly established Lelo movement, led by a businessman Mamuka Kharazadze, may stand as a serious candidate, Georgia’s post-election parliament will be scattered into several factions. Unlike in previous years, Georgia’s next-year parliamentary elections will be held with a proportional system and with no threshold to enter parliament.

Recent provocations from Russia remain a source of concern over Georgia’s future. Among those are actions that the Russians have taken in response to the June and July popular rallies, sparked by receiving a Russian delegation with honors in the Georgian parliament, and other actions that take place regularly on the line of demarcation that runs between Georgia and South Ossetia. This is chiefly about the process of borderization that consists in building border infrastructure, or even moving it deeper into Georgia, that is intended to permanently wall off Georgia from its two breakaway regions of South Ossetia and Abkhazia.

Another story that went public was that of early August, coinciding with the 11th anniversary of the Russian-Georgian war of 2008, when Russia was for over a week erecting a new wire fence in one of the villages, a major obstacle for its residents to access part of their fields. Further incidents were not long in coming, though. In late August, inhabitants of South Ossetia spoke against a police station to be built on the territory of Georgia, in a village where another fencing was expected to be constructed unlawfully, utilizing the situation to further strengthen their forces by the line of demarcation close to the Georgian border. And, just a few days later, South Ossetian authorities accused Tbilisi of having shot down a drone that monitored the police station. Most alarmingly, a risk of resuming the armed conflict has been running high since then.

Taken altogether, in the light of all tendencies and phenomena as cited above, a potentially minor incident or provocation could ignite popular discontent, with citizens taking to the streets, or force cabinet reshuffles. This state of affairs seems particularly dangerous given that who will rule Georgia in the years that follow is currently at stake. Moreover, efforts made to destabilize Georgia, even at short-term, will negatively affect the country’s pursuits for NATO membership in the eyes of a bunch of European capitals that are fearful of Tbilisi being finally admitted into the Alliance’s structures.

Author:
Mateusz Kubiak – a graduate of Eastern Studies and International Relations at the University of Warsaw. Caucasus geopolitics expert.